Offshore: Perception and IFCs – How have they fared?

Offshore: Perception and IFCs – How have they fared? 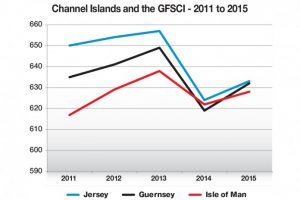 IFCs should use objective measures of their perception to better tackle the reputational challenge.

For the most part, anyone listening to the debate on offshore centers (or IFCs) would conclude that despite the jurisdictions spending millions of dollars on improving their regulatory infrastructures and public relations, there remains a significant negative perceptions of so-called “tax havens.”

If we are to go by the news stories in the media, or the most recent James Bond movie with the now almost mandatory references to an “offshore account,” this conclusion seems fairly sound. But what if we were to use a more objective measure of perception rather those occasional news stories and movies targeted at entertaining readers?

For many years, professionals in IFCs have known that the majority of their clients do not actually have the same perceptions as the negative and pervasive one dished out to the masses by the media so frequently. They would correctly argue that fund managers in New York know the value of services they are getting and most would not expose themselves knowingly to higher risks. This manager would not invest in an alternative jurisdiction because of that reference in the latest movie or a news story about a fund that has collapsed and happened to have an IFC somewhere in its structure.

This stance taken by the practitioners on the ground seems to be supported by the fact that IFCs have experienced continued growth rates despite the significant increase in regulation and cross-border cooperation.

While some may regard the GFSCI as still less than ideal, the Index is at least one possible way to measure how IFCs’ reputations are doing, based on perception by the market place, as well as relying on other measures and indices (to the extent that those are also credible). Since 2007, the GFSCI has been attempting to do just that, not solely for IFCs but for other financial centers as well.

The GFSCI is being used here to illustrate what can be achieved by having similar tools. Having a look at how certain IFCs have fared with this measure might give us some insight into whether the various changes they have made to their regimes and their efforts to counter negative public relations has had any impact, so to speak, on how they are perceived. The GFSCI is consistent in its methodology, so it may be useful to compare how countries have done over a period. 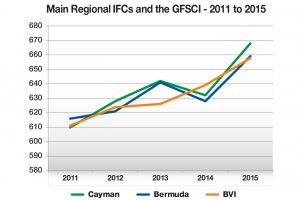 Using the period 2011-2015 and based on the fall report (normally published in October/September each year), we take a look at how the main IFCs in the region (Cayman, Bermuda and BVI), and their competitors across the Atlantic (Isle of Man, Jersey and Guernsey) have done over the years.

The chart is based on the actual GFSCI scores (not the rankings) to provide an objective comparison of how they have fared in the index using the GFSCI methodology. It also separates the two groups and makes for an interesting comparison.

The regional IFCs have displayed a stronger trend upward and have stuck closely together in terms of perception. This supports the idea that the region (or islands) tend to suffer from being lumped together perception-wise. It also explains why their reputations would tend to improve together as well.

There is a much larger gap between the scores of the Channel Islands IFCs between 2011 and 2013, suggesting that their reputations may be more independent of each other.

The charts also demonstrate that all of the IFCs suffered somewhat between 2013 and 2014 as their scores plummeted, although BVI noticeably manages to hold an average upwards trend even during this period.

All IFCs experienced a sharp improvement over the past year. Jersey has generally done better in the Channel Islands, and the Cayman Islands also generally displayed a higher score among the regional IFCs over the past five years.

The general upward trend for the regional IFCs may be in part due to the significant number of cross-border agreements (TIEAs) and other initiatives over the past two years in particular. The other IFCs have also done a lot to improve their regimes, but in terms of media reporting, a lot more tends to be made of the regional IFCS when they make changes simply because they have on average suffered more reputationally.

Perceptions, of course, relate to a lot more than whether an IFC has made positive changes to its regulatory regime. The GFSCI incorporates numerous other factors (for example, competitiveness, secrecy indices, etc.). But while this comparison is by no means meant to be scientific, it does suggest that there have been more gains on the perception front than we have otherwise felt. The ongoing media reports cannot be ignored, but they may not be the best measure of how IFCs are viewed by the marketplace after all.

This also suggest that if IFCs took a more scientific approach to how their reputations compared to their actions (for example, by looking at what they did over the past five or ten years to better understand the GFSCI trends), they may well be on the way to putting a dent into the negative part of their brand that has developed over the past couple of decades.